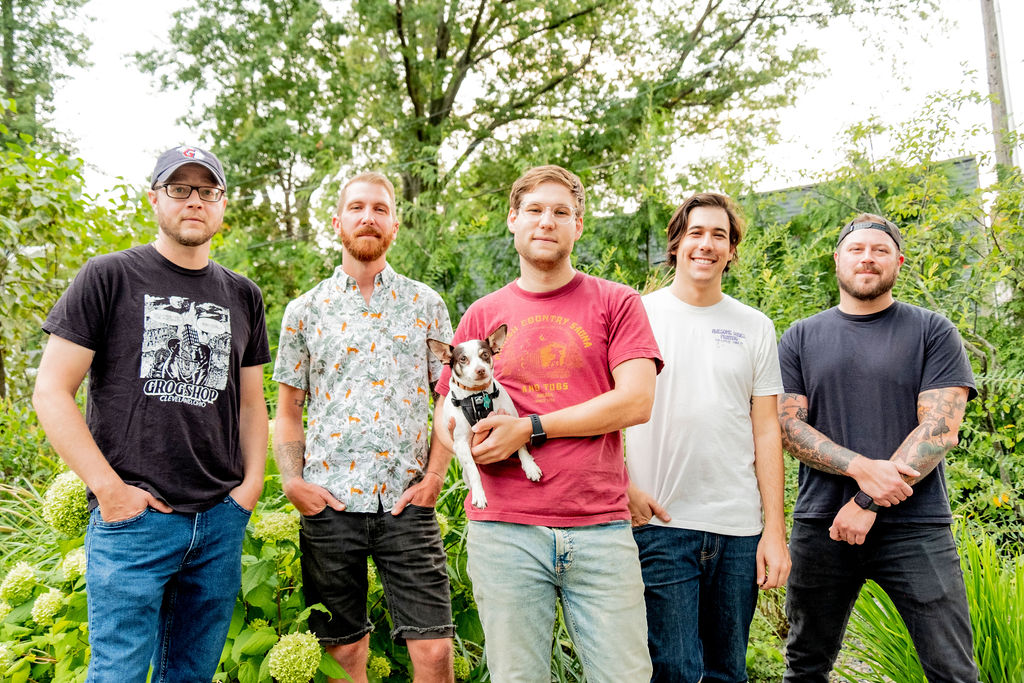 The Stern brothers don’t live in Cleveland anymore.  In late 2016, Max (Signals Midwest, Timeshares, Orbits) made the time-honored Millennial Musician’s Migration to Philadelphia and Jake has lived in Pittsburgh since 2012, now playing in the local indie/slacker rock outfit, Same.  But time and distance be damned, they’ve always found time for Meridian, and the fraternal folk act’s upcoming full-length, New Ways For Old Days (out October 21st, 2022 on Sleep Recordings), rewards that labor of patience and persistence.

Meridian was born on borrowed time, unofficially bubbling over the guitar lessons that Max gave Jake as early as 2008 before gradually drifting toward mutual collaboration, playing shows together (either as an acoustic duo or with a full backing cast) and making records.  Facilitated by a shifting cast of collaborators and engineers, Meridian’s back catalog is similarly happenstance, consisting of split 7” releases, half-demos in childhood bedrooms, and ambitious lo-fi recording challenges alongside two “proper” LPs, 2014’s The Cathedral and 2012’s Aging Truths.  School, jobs and geography can relegate almost anything, but the brothers spent 2015 and 2016 wedging tours (through the American southeast, Australia and China) between other life commitments before shifting focus toward their next record.

In customary Meridian style, writing for NWFOD unfolded sporadically from 2013 to 2017.  Now a prolific solo artist, Max continues to view Meridian as a comfortable vehicle for songs that didn’t necessarily fit into his other projects: “I try not to pick it apart too much compared to the other stuff. Especially working with my brother–it’s nice when it’s a gut-instinct kind of thing.”  Beginning in January 2018 and continuing through the end of 2019, Jake made intermittent eastward pilgrimages to meet Max at Philadelphia’s The Metal Shop for tracking, where Meridian’s Ohio contingency of Tim Carlson (drums, percussion), Steve Gibson (bass) and Jeremy Provchy (electric guitar) would gather to round out the arrangements.

Against a transient web of interstates and apartment staircases, Max paints a familiar picture of imperfect young adulthood.  He explores the corners of changing cities with old friends in songs like “Make More Plans” and “Summer Pressure”, while straining the shrinking boundary between independence and selfishness in “Go to Shows Alone” and “Conversation With a Friend in Brooklyn.”  Across the record’s 10 songs, Max tests the core thesis that maybe you don’t actually have to know everything right now – and maybe that’s part of figuring this whole thing out.

While Max’s weathered songwriting (reinforced by Jake’s harmonies) lays the groundwork for NWFOD, the expanding array of contributors bring his songs to life as a realized, fleshed-out Meridian record.  Auxiliary percussion and keyboard layers adorn the softer, folk-oriented songs, accompanied by Kell Kellum’s steel guitar, tracked remotely from Oxford, Mississippi.  At more rock-leaning moments, Jake’s electric guitar wiggles in and out of phrases on “Go to Shows Alone” before crescendoing to full-on, bent guitar lines at the end of the album’s title track and “Give Off a Glow”.  The rhythm section of Carlson and Gibson provide a steady cushion for the record’s varied arrangements, carefully doling out momentum and weight in equal measure when appropriate.

Although most songs on NWFOD deploy the full backing band, Meridian’s core duo has always been comfortable operating on their own.  “In the beginning, we just wanted to do our own version of The Avett Brothers,” says Max.  “And I don’t know if it ever got too far from that.”  Meridian’s split identity as a spontaneous, parlor-ready acoustic duo is most on display in “Fingers Crossed”, tracked together and captured by a single room microphone.  Two sparse, acoustic field recordings further offset the album’s full-band, layered arrangements.  Performed, fittingly, on a family vacation in Lake Harmony, PA, “Days I Saved For You” and “Painted Gold and Blue” – an instrumental redux of the record’s title track – see Max and Jake sitting around a campfire, strumming into the night on guitar and banjo.  In some ways, Meridian will always operate from an easygoing, coincidental vantage point.  Popping up where possible, sourcing workable tidbits on family getaways, playing shows in whatever configuration makes itself available and releasing music at their own pace.  The future remains uncertain but for now, Meridian is back with a record full of what they do best, New Ways for Old Days.